Silicon carbide was discovered by the American inventor Dr. Edward G. Acheson in 1891 while attempting to produce artificial diamonds from coke and silica sand.  Finding that these new crystals approximated the hardness of diamond and immediately realizing the significance of his discovery, Acheson applied for a U.S. patent. His early product initially was offered for the polishing of gems and sold at a price comparable with natural diamond dust. The new compound, which was obtainable from cheap raw materials and in good yields, soon became an important
aaaaaaaaaaaaaaaaaindustrial abrasive.
a
As an abrasive, Silicon Carbide is black in color and is the hardest and sharpest of the minerals used commonly in coated abrasives. It’s harder than Aluminum Oxide but considerably more friable—which means that it fractures readily, exposing new sharp edges. Silicon Carbide is most effective with non- ferrous metals such as brass, copper, bronze, magnesium, titanium and aluminum where fast, cool cutting is desirable.  Non-metallic applications include ceramic, stone, glass, plastic, leather and rubber.  Silicon Carbide is superior to any other abrasive in its ability to penetrate and cut faster under light pressure.
a

Aluminum Oxide was introduced in 1900 by CT Jacobs.  It is produced from the raw mineral Bauxite where it is fused in electric arc furnaces at temperatures up to 2600’ C, which is a temperature 800’ C hotter than lava in a volcano! The AO ingots are cooled and then crushed with a roll crusher to produce a large volume of splintery, sharp and friable abrasive particles that break down easily to remain sharp and produce a minimum of heat buildup. The crushed AO is then sized into the various grits used in producing coated abrasive products.
a
Aluminum Oxide remains the most popular abrasive used in sanding products, as it is considered the most “all purpose” abrasive.  It is a reddish-brown in color, extremely tough and its blocky shape facilitates the penetration of tough materials without excess fracturing or shedding. It is specified for applications on high tensile materials such as carbon steel and alloy steel as well as wood, composites and solid surface.
a
These traditional synthetic minerals used in abrasives offer many advantages over the traditional naturally occurring minerals. Synthetic minerals are consistent without unforeseen impurities. In addition, we have the technology to control the grain characteristics in a synthetic mineral.  Grains for coated abrasives are different than the grains used in grinding wheels. They are elongated to achieve the best bonding results and abrasive performance.

Aluminum Oxide is manufactured in two levels of abrasive grain surface density: closed coat and open coat. A closed coat product is one in which the abrasive grains completely cover the surface of the backing. The greater number of “abrading points” per square inch results in a larger amount of material being removed before the product becomes worn out. An open coat product is one in which the abrasive grains cover approximately 50% to 60% of the coat side of the backing. Open coat AO frequently cuts faster and provides a greater resistance to loading, which makes it an ideal choice for sanding on softwoods.
at May 22, 2013 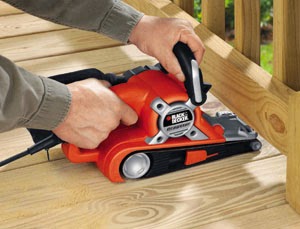